How important is oxygen in the aquarium? This is a subject that is not often discussed or taken under consideration.

Obviously, fish need oxygen to breathe, plants need oxygen at night and the beneficial bacteria need oxygen to break down (oxygenate) waste. Basically everything that dies off or decays in the aquarium requires and therefore depletes oxygen. Unhealthy or dead plants, decaying live rock and live sand, and uneaten food just to name a few.

Organic acids, proteins, and carbohydrates can also reduce the oxygen level in the aquarium.

Oxygen enters the aquarium through gas exchange in two ways:

Salinity is measured in ppt and the dissolved oxygen content in mg/l (ppm).

Please note that a salinity of 0 corresponds to a freshwater tank.

The above levels show 100% saturation, the maximum possible. The average saturation in an aquarium is about 70%.

The level of dissolved oxygen varies throughout the day, it is higher during the lighting period and has the lowest concentration in the early morning hours.

A dissolved oxygen content of 5-7 ppm is sufficient, first signs of stress will show if the content drops below 4 ppm, fatalities can be expected at 2 ppm.

In general, an aquarium has sufficient oxygen to support the livestock. Nevertheless, as indicated in the table above, higher temperatures or salinity levels might need attention and a good source of oxygen.

Some reasons for low dissolved oxygen levels are:

Another term in connection with dissolved oxygen is the Redox (reduction-oxidation) potential.

In simple words Redox refers to the relation of oxygen and waste particles. The more waste, the less Redox potential due to lesser oxygen. Redox can be measured in mV and the range should be between 150 to 250 mV.

Redox is also related to the biological oxygen demand (BOD). BOD is the measurement of how much oxygen is needed to break down the waste created. The higher the BOD value, the worse the quality of the water.

Nitrates contribute to high BOD levels, since this generally indicates a high break down rate of waste.

How to Clear Cloudy Aquarium Water 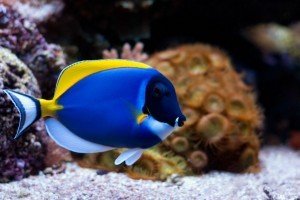