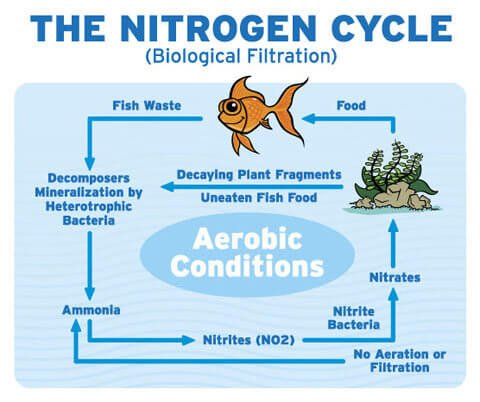 The biological process, known as the nitrogen cycle, breaks down organic waste, which accumulates inside the aquarium.

Understanding the nitrogen cycle leads to greater success in caring for aquarium fish. Therefore, we highly recommend familiarizing yourself with this basic, yet important biological process.

What is the Nitrogen Cycle?

The nitrogen cycle is the natural biological process responsible for breaking down waste in the aquarium, making the water safe for the fish.

Adding fish to a new aquarium kick starts the nitrogen cycle. During this initial stage, waste quickly breaks down into ammonia. This waste primarily consists of fish excrement and uneaten fish food.

During the third and final stage of the nitrogen cycle, nitrobacter bacteria convert the newly formed nitrite into lesser toxic nitrate.

It is important to understand that the nitrogen cycle is an ongoing process, which is essential for healthy fish life. Once ammonia and nitrite are no longer detectable, the “cycling” of the aquarium is complete, however the process does not stop.

A biologically healthy aquarium should never have detectable ammonia or nitrite. If either is present, it is because of a bacterial imbalance.

A balanced aquarium continues to efficiently break down dissolved waste, without raising ammonia or nitrite to detectable levels.

Why is the Nitrogen Cycle Important?

Without a functioning nitrogen cycle, the aquarium would turn into a toxic stew unable to support fish life.

Because an aquarium is a closed-loop eco-system, waste will accumulate.

Introducing fish, plants, and food to your aquarium begins the nitrogen cycle. Food consumed by fish provides them with energy, which they burn with the help of the oxygen they breathe from the water. As a result of this energy burning process, fish return carbon dioxide and nitrogenous compounds back to the water.

Carbon dioxide mainly dissipates through aeration at the surface of the tank, or through photosynthesis by aquarium plants.

Ammonia and nitrite are highly toxic for fish, therefore it is imperative that the nitrogen cycle is stable and balanced.

The nitrogen cycle eliminates toxic nitrogenous compounds as described above. Highly toxic ammonia is converted to nitrite, while toxic nitrite is converted into lesser harmful nitrate.

The entire nitrogen cycle begins with the conversion of solid wastes excreted by fish into ammonia. Bacteria known as nitrifiers include two “microbial partners” which transform toxic ammonia into nitrite and nitrate via biochemical oxidation.

What are the Ideal Aquarium Conditions for the Nitrogen Cycle?

The efficiency of the nitrifying bacteria involved in the nitrogen cycle, depend on the aquarium’s water conditions.

Setting Up Your First Aquarium